DUBLIN BAR THE Bernard Shaw has been refused permission by An Bord Pleanála to continue operating its iconic exterior beer garden and dining area. 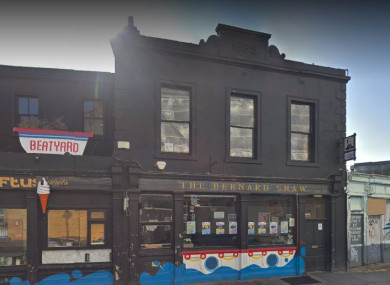 The Bernard Shaw is located to the south of Dublin city centre and has been a popular hotspot for well over a decade, with its adjacent street food section Eatyard also drawing in the crowds.

Locals in that area of Dublin 2 had appealed to An Bord Pleanála against the plan, but Trevor O’Shea – CEO of Bodytonic who runs the pub – told TheJournal.ie that a renewed application will be made to continue operating the outside area.

The bar originally applied to Dublin City Council in October for the retention and continuation of the semi-covered smoking area and beer garden to the exterior of the property on the capital’s Richmond Street.

This followed on from a previous successful planning application several years before to continue to use the area.

In its application, the Bernard Shaw said there is a “brewing unease and scepticism” at how “once-lauded cultural institutions are being replaced by hotels and short-term accommodation”.

It cited the recent demolition of venues such as the Tivoli Theatre and Andrews Lane Theatre, and said they were high-profile losses to the nightclub, entertainment and cultural spaces within the city.

“The Bernard Shaw stands to continue as an attractive destination, thriving business, and cultural touchstone in the fabric of the city’s current recovery,” it said.

For the near-term this success is depending on the operation of its beer garden, open air dining area and the big blue bus.

In objections lodged to the council by nearby residents, the noise levels from the pub were criticised.

One wrote: “It is unfair that we cannot protect ourselves against the level of noise and music coming from this venue. I cannot enjoy the back garden at all with the loud thumping. This is no life for a cancer survivor trying to live without stress. Please put the music back inside and let me enjoy living on this street.”

Another said that the venue has a weekly calendar of events and claimed it “effectively operates as an open-air live music venue”.

“These events are amplified into the beer garden and are clearly audible through the front and back windows of my house and in my back garden,” the resident said. “I have phoned the bar on numerous occasions to have the music turned off, most recently at 11pm last Sunday night. The phone is not always answered.”

In December, the council granted the venue permission to retain the area for a period of three years. However, that decision was then appealed to An Bord Pleanála, claiming the pub had not complied with previous conditions relating to noise levels and that there wasn’t a specific plan in place to address residents’ concerns.

In the An Bord Pleanála’s inspector’s report, it noted that the Bernard Shaw did not respond to the grounds of appeal made by a local resident.

The inspector noted that the existing use of the site is “clearly a vibrant enterprise with its own unique character within an area notable for the extent of dereliction”. She also highlighted that for a case to be made to keep using the site, evidence must be demonstrated of detailed noise mitigation measures.

Her recommendation was to request further information from the Bernard Shaw before ruling on the matter.

An Bord Pleanála, however, chose to refuse permission to the bar outright.

It said that to grant permission would likely delay or undermine “comprehensive regeneration” on the site and adjoining lands and would be inconsistent with the “emerging pattern of development in the vicinity”.

On the basis of the evidence submitted with the planning application and appeal, the Board is not satisfied that the development, for which retention permission and permission for temporary continuation of use is sought, would not seriously injure the residential amenity of properties in the vicinity, by reason of noise and disturbance.

Local councillor Mannix Flynn told TheJournal.ie that the decision from An Bord Pleanála was the “exact right thing” and a big boost for local residents.

“I’m not surprised they rejected it,” he said. “Certainly the local residents have had enough. The excessive noise has been too much for a long time.”

Flynn said that general area around Richmond Street can be plagued with anti-social behaviour, and it is the residents who suffer.

A bunch of cool hipsters can think it’s an amazing place. But the level of anti-social behaviour that goes on is incredible, and the noise is appalling.

“People in the neighbourhood don’t use many of those nearby laneways any more,” the councillor said. “It’s a nightmare.”

O’Shea, who runs Bodytonic, said that the group now plans to submit a fresh application to continue operating the outside area of the Bernard Shaw.

“We’ve been down this road for years,” he said, indicating that it would go back to planning authorities with a renewed application.

Bodytonic also operates Wigwam on Abbey Street, the Back Page in Phibsborough and Jam Park, which has opened this week in Swords.

Source: The Journal.ie, to read the article click here.