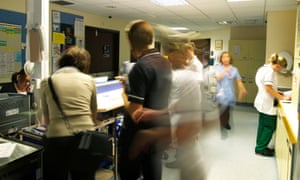 Staff running a typical intensive care unit (ICU) in Belgium carried out a study of noise levels in one ward after complaints from patients.

They used a sound level monitor to record decibels continuously for 24 hours beside a bed and at a nursing station.

At the side of the bed, average noise levels were 52.8 decibels (dBA) during the night and 54.6 dBA in the daytime. A total of 14 peaks above 80 dBA were recorded, including one that registered 101.1 decibels – equivalent to the sound of a pneumatic drill.

The WHO recommends an average sound level of below 35 dBA in hospital wards during the day and says it should not exceed 40 dBA at night.

Dr Eveline Claes, from Jessa Ziekenhuis hospital in Hasselt, Belgium, said: “The sound levels in our ICU clearly exceeded the WHO recommendations but are comparable with sound levels in other ICUs.

“Those elevated sound levels, as well as frequent sound level peaks, can be responsible for the subjective feeling of noise pollution experienced by patients, nurses and doctors. In our department, measures should be taken to reduce the average sound level and the incidence and magnitude of sound level peaks.”

Equipment, alarms, hospital machinery and staff activity are all likely to have contributed to noise levels in the ICU, said the authors, who will present their findings at the European Society for Anaesthesiology’s annual meeting in London.

Dr Claes pointed out that it was “not easy” to run an ICU without noise.

She added: “We need the alarms to warn us about emergencies. Various programmes of staff education, task scheduling, equipment repositioning and alarm threshold review have not lowered sound levels to within WHO-recommended levels.

“The practical solution at present seems to be earplugs or other ear defender devices for patients, although there may be opportunities in the future to modulate alerts through the use of smart alarm systems and to develop equipment that produces less noise.”

The study found average noise levels of 52.6 dBA at night and 53.9 dBA during the day at the nursing station, with a maximum sound peak of 90.6 dBA.